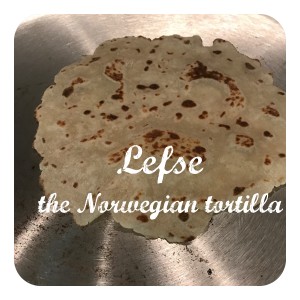 Even if you aren’t Norwegian, I think you will love lefse. Lefse is very comparable to a tortilla but it is made with riced potatoes, whipping cream, butter, sugar, salt and flour and generally served spread with butter and sprinkled with sugar or cinnamon/sugar then rolled up. I have also heard of others who ate it as part of their meal and filled it with meat and other things and rolled it up just like you would with a tortilla.(At the very end of this post I will include the recipe that I used and lots of tips)

My lefse journey began when one of our invited Thanksgiving guests was asked by my husband what food was special to him for the holiday dinner? I panicked a little initially when he said lefse, since I had not seen nor heard of it since moving to CA. I put out a Facebook query to local friends asking where I might find it. My friend Shea came through big time as he knew personally of a Scandinavian Deli in LA where they made it fresh and we made the trek and got some. It was delicious and we were so excited to reawaken a cultural tradition we had all but forgotten about. It turned out to be such a hit that I then considered (with lots of prodding from Alyssa and Mike) learning how to make it. My North Dakota friends and family provided lots of encouragement as well.

It was much easier than I thought, it is involved and required a bit of an investment in equipment but I am so glad that I did it. My equipment arrived from Amazon on Tuesday because I got blank stares from people in local stores when I tried to buy a lefse grill. Alyssa and I excitedly but cautiously rolled out our first piece and I wish I would have gotten a picture but we had to do quality control which required us to eat the first half dozen so the one pictured was taken after we figured out how to make them look a little better (they are not the most photogenic food so take my word for the fact that that is a pretty piece of lefse

🙂 ) It was the beginning or a yearly tradition that we are anxious to share with daughter in love and grand daughter when she is old enough to be near a 500 degree grill.

I research recipes and read not only the recipes but the reviews and talked to people about the recipe they used and did not have a real comfortable feeling about any one recipe even a couple of hours before I began boiling potatoes. Even the five star recipe reviews said things like “this is the best recipe but I used twice as much flour as called for” or said that the recipe needed to be chilled when the recipe did not indicate that it did.

In the end I opened my lefse griddle and checked out the recipe that was included and knew right away that with only a minor change, this was the one I would use. I still did not expect great results on our first try, I fully assumed that there would be lots of trial and error and hoped that eventually we would figure it out but this recipe made the project easy, straight forward and flawless!

Details:
– I bought the Bethany Housewares 730 Heritage Grill on Amazon
Prime for 109.00.
– Lefse Stick, Sheathed Also on Amazon Prime.
– Bethany Replacement Pastry Cloth and rolling pin covers I got
mine at Bed Bath and Beyond in North Dakota.
– A potato ricer, I got mine at Bed Bath and Beyond in CA., you do
not want any lumps in your potatoes.
– Use Russet Potatoes, growing up in ND I used reds for
everything but potatoes differ a lot in starch content and this
recipe needs Russets.
– Plan to boil your potatoes, rice them and add everything but the
flour at very least a few hours in advance of when you plan to
actually make the lefsa, because you will want the potato
mixture to be cold when you add the flour.